This year at DrupalCon, we wanted to pay homage to all the work that has gone into the Drupal project and bring the community together for something fun. The most uplifting option: a funeral. So, on May 12, 2016, hundreds of DrupalCon New Orleans attendees paid their respects to our dearly departed Drupal 6, which met its “end of life” on February 24th. Has there ever been a mass funeral for a CMS before? We don’t know. Keep reading to find how and why we pulled it off with our partners at @FourKitchens.

At Kalamuna, every Friday, we have an agency meeting in which everyone talks about what they’re working on, and life in general. I don’t remember how it happened, but one of these meetings in 2015 turned into a idea spitball session about what our next fun event could be. It’s all hazy. But we got to talking about Drupal 6 and how no one used it, and Andrew Mallis said we should have a funeral for Drupal 6 in a New Orleans cemetery for Drupalcon. I stuck on the idea because it was so darkly funny, and unexpected for a developer conference. If pulled off well, people would come  away from our event thinking things like “I can’t believe they did that, that was so fun!” and “Kalamuna did something to make people’s lives a little better.”

Planning for DrupalCon began in earnest in early 2016, and we continued to circulate ideas. The funeral concept still had legs with folks—people still joked about it. So when it came time to really decide what we were going to do, we got together and committed to the funeral. I won’t say that it was because of me that it happened, but I sure pushed for it. I just loved the idea.

At that time, we didn’t know how to take over a cemetery. Andrew Mallis suggested we continue to meet at standups to flush all this out, so we did.  At one of these meetings, someone (I think it was our designer, Thiago de Mello Bueno) asked aloud: “what if we had one of those funeral jazz parties that they have in New Orleans?” A jazz funeral for a CMS. Absurd. For weeks we weighed the pros and cons of holding an event in the streets or in a cemetery. (“If we do it in the cemetery, where will people pee?” one Kalamunist asked.) After lots of discussion, we settled on a bar, imagining that we could have the jazz band at the bar. But the bar wouldn’t allow live music. So we did some more research and found out that a traditional “second-line band” actually leads a marching parade in the streets. So we decided that’s what we were going to do: a parade. A parade that would end at a bar. So people could have somewhere to pee.

About 5 of us met every week to divvy up tasks (Trello!) and ask questions, discuss logistics, and report on all the work we had done. Our office manager, Ken Lo, figured out the lion’s share of the logistical details. Thiago and I worked on getting the word out about the party and creating a coherent aesthetic for everything. Crispin Bailey and Andrew Ward pitched in with costume and prop ideas, music planning, etc., and everyone offered opinions on what exactly would go in the coffin (A cake corpse was in the mix but we settled on cupcakes.) Project manager John Nguyen stepped in and put elbow grease into every part of the project. Half way through, we joined forces with our friends at @FourKitchens and the whole thing went on overdrive. We worked together on planning, design and production. As May drew near, excitement at both agencies heightened. The week before the con was a flurry of parade route questions and funeral dirge selections.

Before May 12, we worked on the look, feel and tone of the event. One of our designers, Thiago de Mello Bueno (@madeofpeople) devised a visual identity that led all promotional materials: I kept the word “levity” in mind when writing invitations and promotional social posts:

We scheduled our second line band, The Jaywalkers, to get heads turning with some tunes in the conference center at 5:15 p.m. 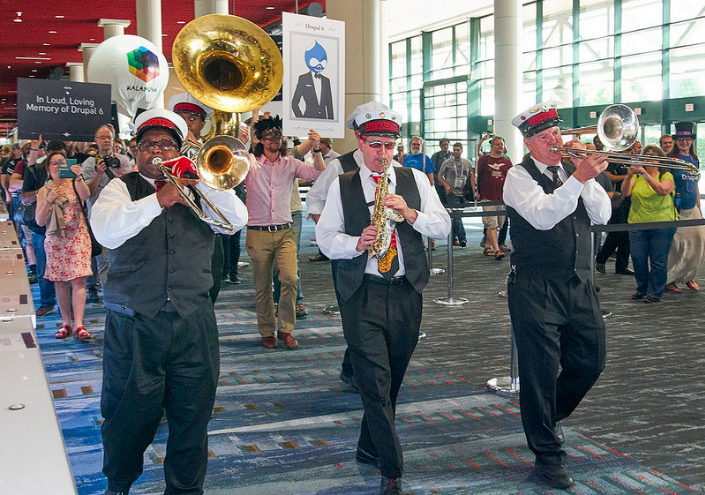 The band had an easy time getting attention, and conference-goers started to join in. 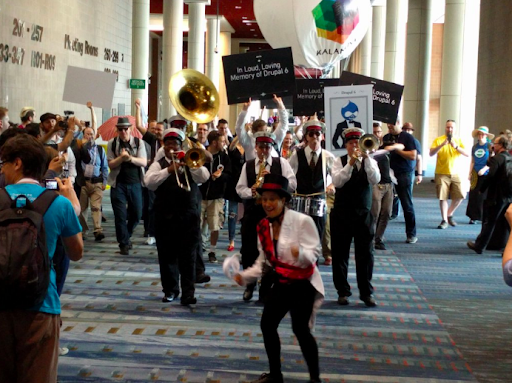 Then we hit the streets: 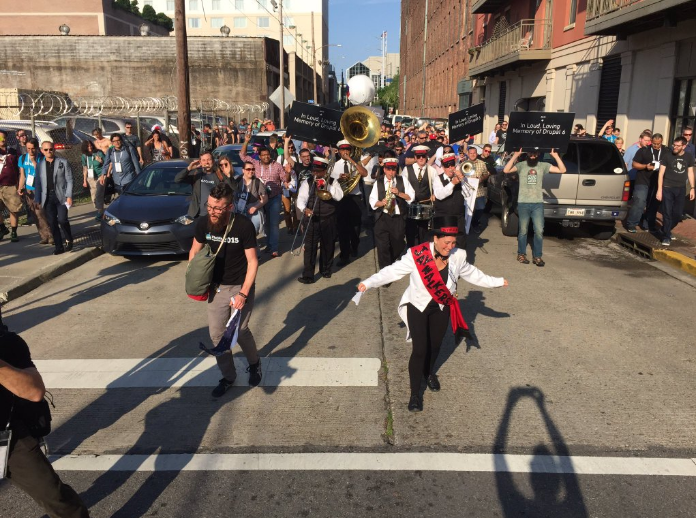 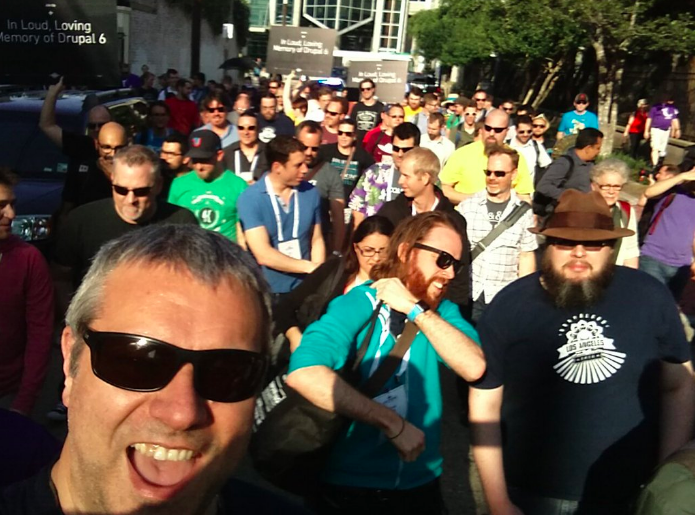 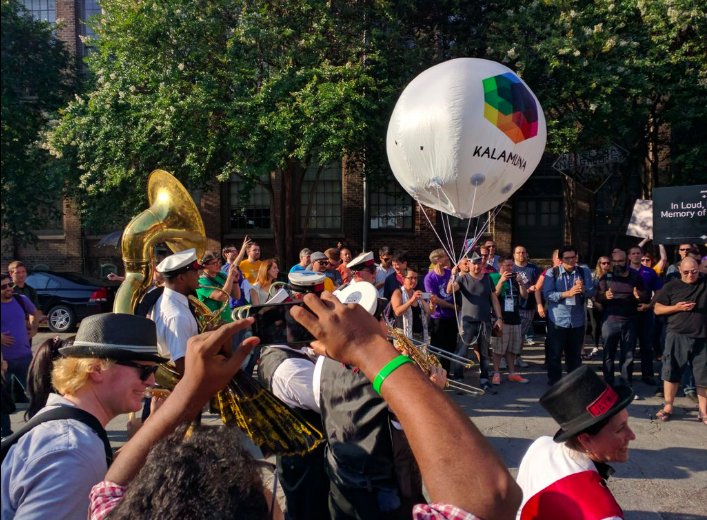 Mourners arrived at the Rusty Nail, our funeral party bar, and were greeted by some lovely design by Thiago: 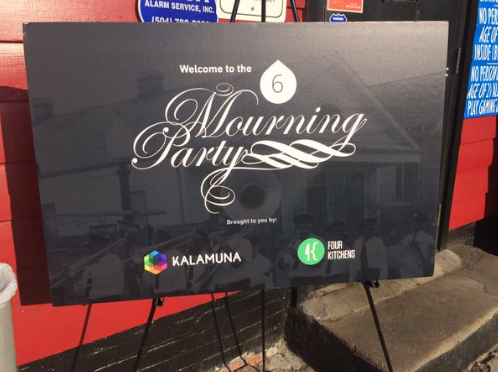 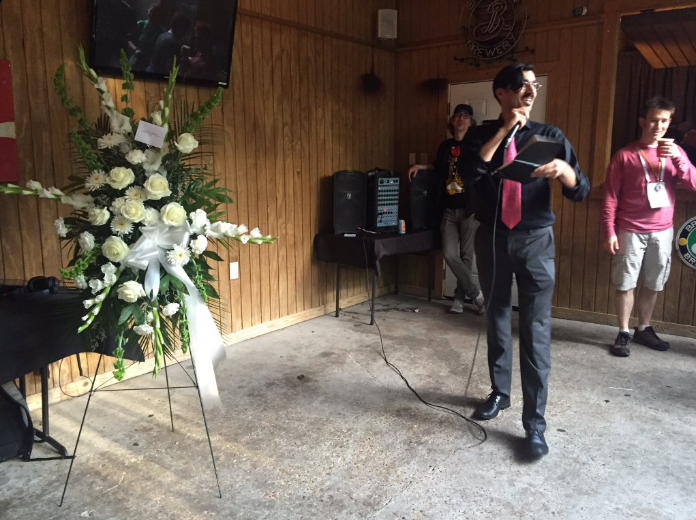 @outlandishjosh had shared some words: 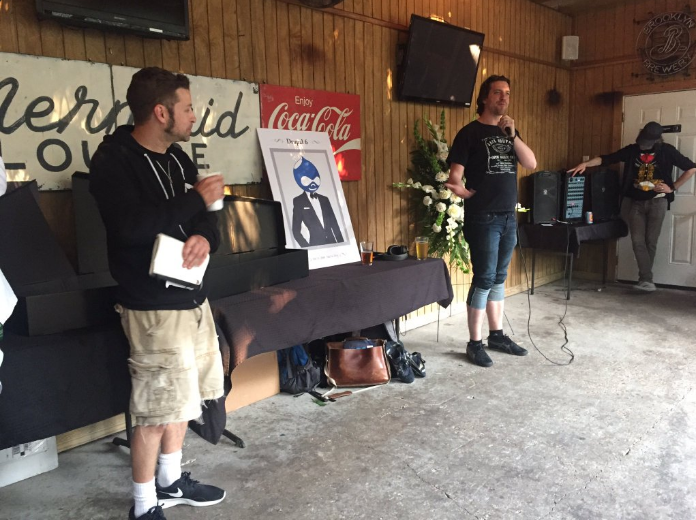 In the end, a good time was had by all. All except for the infamous Kalamuna balloon, which we somehow lost during the parade, and which we believe has gone floating down the Mississippi River. If seen, please contact us.