I left the global tech-music-media conference with more armchair philosophy than I could fit in my Delta Economy seat.

SXSW 2018 was startups and pitch slingers and the human contents of 10,000 international airports descending upon a smallish downtown. There were also talks on branding and marketing, which is what I mostly went for, and since soaking those in, my slow-percolating brain has been bubbling on such things as British racists, water-beer cans, and what levels of moral rectitude we should be expecting from political leaders. So here it all is, for you, bubbling over.

The populists just feel left out.

My favorite talk was by London Mayor Sadiq Khan, along with his interview by Lydia Polgreen of The Huffington Post. Khan spoke plainly about how new technologies are connecting people and creating economic opportunities—fostering a more global society and economy—but also destabilizing social norms and making many jobs obsolete. He pointed out that not everyone can keep up with these changes, and that some feel culturally and economically marginalized. Their resources—access to social and/or material capital, which depend on many complex factors—prohibit them from participating in the global economy. And now, many of them are blaming others, and this blame is taking shape as racism as national policy, and economic protectionism.

I liked this talk because he clearly connected people’s lack of access to their resulting reactions, adding that it should be the role of government to make sure that people are integrated into the new economy. As it is now, he said, governments are generally behind on how new technologies are changing things (see the US congress’ ill-informed questioning of Mark Zuckerberg) instead of keeping ahead of them and using them to help include as many people as possible.

As someone on a constant media diet of social yadda yadda and emails, it felt relieving to stop and think, “Oh, yeah, I get it now: the racists are just sad because they don’t know how to use GitHub and Adobe Creative Suite. I would like to pay extra taxes to teach them how to wireframe mobile apps—or become acro-yoga performers, whatever they want that will work with the ‘new economy.’”

I want my leaders to stand for and often live their morals.

I liked Khan’s talk even more because it gave me hope. He said that global cities can lead the way in using technology for the better by making sure it’s used to improve lives and reduce inequality. He did also note that in most Western countries, because an unengaged and uneducated citizenry steers governments, private interests continue to direct technology’s applications. This is a problem thousands of political science PhDs are thinking about and that no one will solve in one speech, but, it’s important that he explicitly offered what he thinks are moral and just applications for new technology: “improving lives and reducing inequality.”

My takeaway here is that whether or not leaders can execute on their objectives, it’s still important for them to communicate just goals, as Khan did, even if they sometimes do differently in private. (I don’t know what he does in private, but I know that not everyone can live up to their own aspirations.) When we don’t hear a leader espousing justice, our whole world turns upside-down. We’re like, “wait, uh, so, before today we were all about “liberty and justice for all,” but now we’re all about grabbing pussies, deporting “bad hombres” and deifying archaic and destructive industries such as coal and oil and gas? Who are we?” If we have no moral north star, we’re basically saying to ourselves that cynicism and exploitation are A-OK.

How do brands engage with social causes? There’s a framework for that.

Brands live different relationships to social causes, obviously. On one side we have groups like the Sierra Club, who exist to save the planet, and on the other side we have companies like Prada, who exist to celebrate frivolity and self-absorption. But there’s more in between these two ends of the spectrum. At Creating a Purpose-Driven Brand by Design, R/GA executive creative director AJ Hassan and PepsiCo VP of marketing Todd Kaplan set us up with a way to think about these differences. 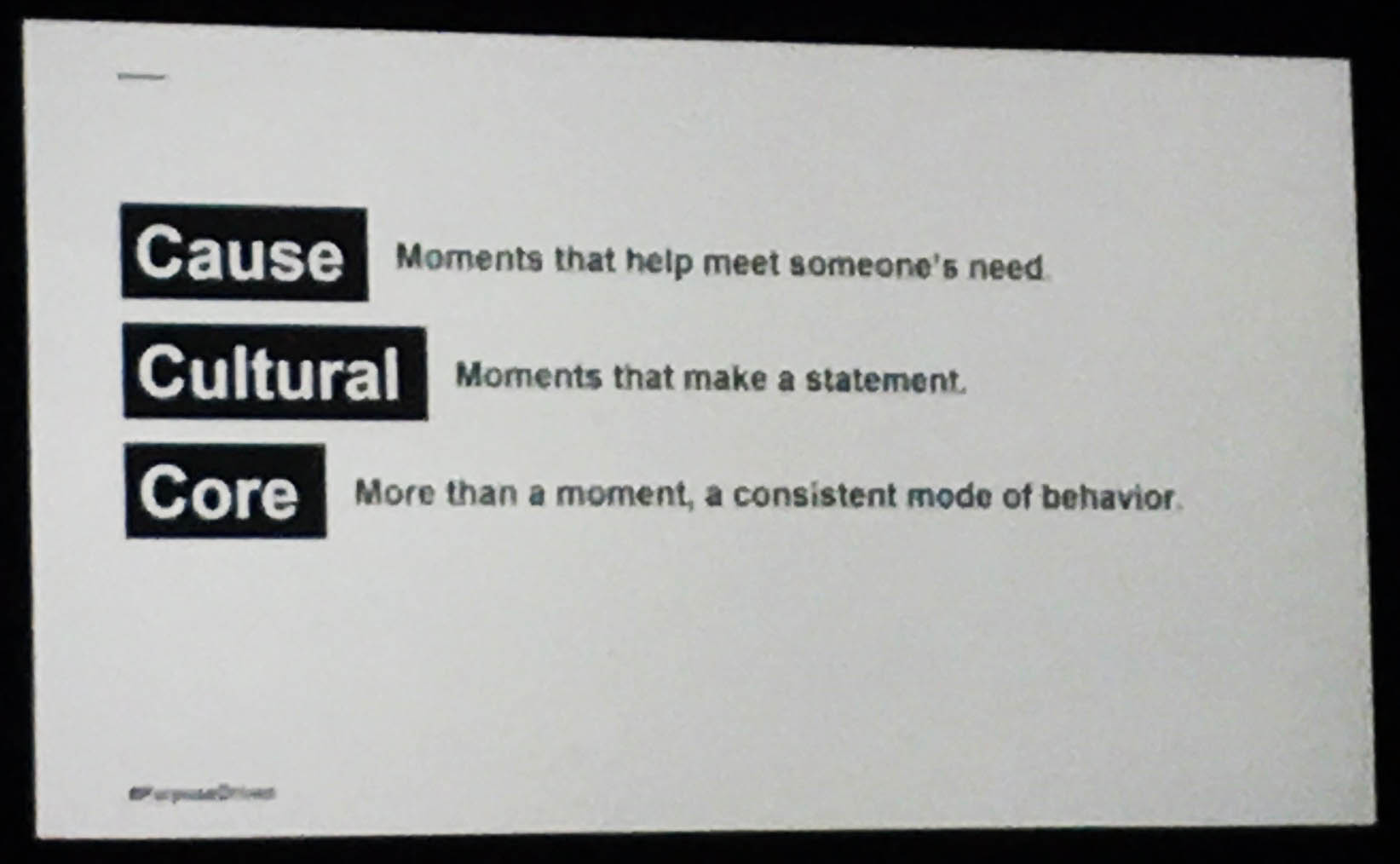 The panelists highlighted instances in which brands address or join a cause when it’s peripherally relevant or they see an easy way for them to contribute. The moment must arise; a brand manager cannot invent it. For example, in 2017 Anheuser Busch filled what would have been beer cans with water and delivered these to the victims of Hurricane Harvey and other natural disasters. AB was able to do this because of its huge factory and logistics capabilities, and it probably didn’t put them out too much. But saving people in need is not Anheuser Busch’s mission.

Brands also take advantage of cultural moments to make statements and ingratiate themselves to their audiences. These are cases in which a company jumps on a bandwagon to stay relevant and sees more gain than loss from adopting a certain point of view on a cultural matter. Coca-Cola did this famously in 2014 with its Super Bowl ad in which a succession of angelic voices sing "America the Beautiful" in English, Spanish, Keres, Tagalog, Hindi, Senegalese, French and Hebrew to a visual mosaic of rainbow citizens Doing Things. I don’t see this ploy as having been too risky or subversive because Obama was president then, and thus Coke’s ad was on the side of the ideology in power, but much of America has always been racist and the whole “show me the birth certificate! / He was born in Kenya!” lines were very much A Thing then. I give Coke a tad more cred, though, for having run the ad again in 2017 after Trump signed his first travel ban. In this latter case Coke challenged racist sentiment that, ostensibly, half of the US had voted for.

And then there are brands that live a cause at their core. This category is especially interesting to me because Kalamuna is a purpose-driven brand whose strategy and creative work I lead and co-produce. Brands like Kalamuna, the Sierra Club, the NRA, etc., all exist to work for a cause or set of causes under a larger umbrella. 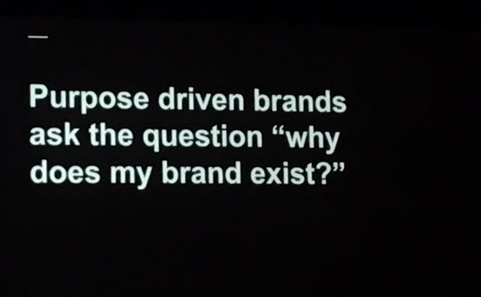 Purpose-driven brands “look to impact society and culture,” and ideally, their actions and words align with their cause. Touting some stats about millennials, the panelists offered that increasingly, young people want to do things that matter. They care about morality and whether or not their dollars are going to moral people and causes. If this is a trend and it continues, I wonder, will all companies need to exist for a cause (not just support a cause on the side) in order to operate? Is it reasonable to expect every single kind of company to originate from a moral impetus? What about a paperclip company? Must it begin with the purpose of supporting American steel workers with fair wages and an environmentally-friendly factory, and then find that the best way to execute on this purpose is to produce fair-trade, morally upright paper clips?

Sometimes a tit-for-tat is a fine relationship builder.

More on rectitude. At the well-attended Creating a Movement through User Generated Content session, the panelists announced that for every one of our tweets bearing the hashtag #SXSWBrandless, the retailer Brandless, which was represented by panelist Tina Sharkey, CEO, and whose mission “is deeply rooted in quality, transparency, and community-driven values” would donate three meals to Feeding America. The purpose of this offer was to get attendees mentioning Brandless online and secondarily, make us internalize and engage in Brandless’s mission. It worked. I was totally in and I live-tweeted their hashtag. It goes without saying that offering your audiences an earnest 1-for-1 trade with seemingly no evil involved works. So, aside from all of the obvious marketing applications of this dynamic, I left the session thinking about how this 1-for-1 thing works in other contexts, whether it’s in-person, via social media, as a copywriter, as a human, as a manager, as a cat, or as an Anything; offering one thing in return for one thing is an easy relationship starter. In fact, last month I set down one can of cat food for the stray who hangs out where I live. The next day, I found a dead bird at my backdoor. All it took was that tit-for-tat interaction, and now Backyard Cat and I are friends. Backyard cat, I see you, and I will be using your lesson at work and everywhere.